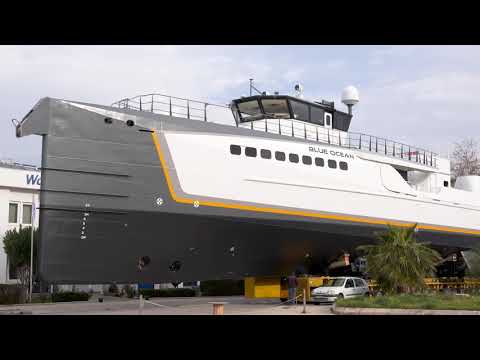 Video: Inside the Launch of Damen's Support Vessel Blue Ocean

Damen has released a behind the scenes video showing the launch of Blue Ocean, which hit the water at the yard's Antalya facility earlier this month.

Launched early on March 6, the 55.5 metre yacht will be ready for delivery this spring.

Constructed from steel and aluminium, Blue Ocean features a range of standout support features including deck space of over 240 square metres for the storage of multiple toys and tenders measuring up to 15 metres in length.

Blue Ocean also includes a 50 square metre aft adventure/ dive centre on the lower deck, which is accessible via the swim platform.

Blue Ocean also sports a main deck submersible hangar, workshop and garage on the main deck, a new feature. Elsewhere, there is a touch-and-go helipad and storage for numerous tenders and toys, as well as a 12-tonne deck crane for their deployment and retrieval.

Accommodation on board Blue Ocean is for a total of eight guests in four cabins, as well as a staff quarters for seven crew and four additional staff, such as pilots.

Other key details include a beam of 9.25 metres and a 499GT. Blue Ocean will have a top speed of 20 knots and a range of 5,000 nautical miles at 10 knots. A reduced draught meanwhile of just three metres makes the yacht suitable for operations in the Bahamas.

In Pictures: Inside the Launch of the First Riva 88 Folgore

Connect With Us On

Back to previous page